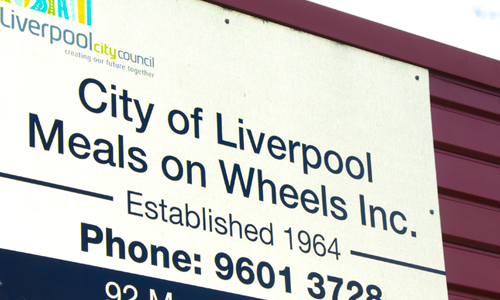 We are a caring service supporting frail older people and their carers in the Liverpool Local Government area to maximise their health and independence under the Commonwealth Home Support Program.

A little of our history

Our Service celebrated 51 years of service in 2015.  From humble beginnings in 1964, when the first meals were cooked and delivered out of the home of Gus and Judy Wych assisted by Mrs. Flo Hanna (the first day two meals were ordered and delivered wrapped in a blanket to keep them warm) we have grown to the well resourced organisation we are today.

In 1964 the Liverpool press reported that acting upon a motion from Alderman Wych, Mayor Ernie Smith called a public meeting and from the minutes of the special meeting on 12 October 1964, with 20 people in attendance, a motion to set up Liverpool Meals on Wheels within one month was carried with a committee of 10 elected and Alderman Wych elected Chairman.

Correspondence shows the St. Luke's Church Committee agreed their Church Hall could be used for preparation of the meals.   The first meals were cooked and delivered by a band of volunteers in the week of 10 November 1964.   Over the years many changes in premises took place.  December 1966 a move to new premises in Bigge Street (on the site formerly known as “Dewsbury’s Horse Stables”). December 1974 Liverpool Council allocated space in the rear of the Senior Citizen’s Centre.  In 1977 the Committee began lobbying the Council for larger premises which resulted in an allocation of $120,000 over 1986/87 to erect the building in its current location which the Mayor, Casey Conway, opened in 1988.  In 1993 the Council added the meeting room to the building to complete the premises as they currently stand.

From the Council owned building in Memorial Avenue we continue to receive the support of the Council in maintaining these premises.   Each year the Liverpool Council provides a community donation to enable the purchase and packaging of Christmas hampers for every client.  We employ 4 part time administrative staff and 3 part time kitchen staff who do a wonderful job meeting the needs of our clients as well as recruiting and co-ordinating our great band of volunteers.